Dear readers- for those of you still following along....

Today is our first Father's Day without Doug. Also, it's the longest day of the year. Happy Solstice! I've been warned from folks schooled in griefy matters that the first year's worth of anniversaries is really, really hard and I know that is true. So gearing up.

A bit of a catch-up: Clara and I are doing pretty well, given the lock-up that continues and the extreme uncertainty about what lays ahead for us in almost every way. We just completed our grief groups, which served to connect us to some amazing moderators (Circle of Care, highly recommended) and people within those small groups who we were able to relate with rather easily. We will likely sign up for more therapy after school settles in. She told me recently "Mom, I don't do well with loss" said like someone older than her 16 years. And she is telling me how much she misses him, but only when prompted. She wishes he was around to give her some life advice about a few things that have challenged her lately. Me, too.


Since I went back to Nick's Cove to celebrate our 20th wedding anniversary solo (on May 20, 2020 no less)- I have been missing Doug even more and cry at the drop of a hat. There, I finally collated the hundreds of amazing photos that Margot Duane shot for our wedding and taped them into the big, marbled paper wedding album I bought in Florence during our honeymoon. That was like uncorking a time capsule of the Good Ole Days that brought up so many blissful memories.

The community we were in the middle of was really forming up deep and hard, and Doug very boldly told me in our vows that he "would always be my primary partner"-- a statement that shocked some and went over the heads of  many others who didn't catch what that meant. I realize now that were were standing up for non-monogamy and were determined to lead the way for those who were curious and also interested. How prescient that vow ended up being for us.

Seeing images of so many close friends & family TWENTY YEARS AGO was heart warming, surprising and simply wild. So many changes since! But so many bonds sealed tight, too with people who are still helping Clara and I with this wild ride. I realized anew how extremely lucky we are and the silver linings even in COVID times just keep being revealed.


I went back there to do some witchcraft, basically. For the first time I was able to conjure his image easily since this same cottage was the place where we last had our romantic getaway, which I blogged about earlier here. I could actually SEE him napping in the king size bed, and in the big clawfoot tub where I gave him a sweet bath. And I could feel him in that room with me. I played our wedding soundtrack that he had made and also a really meaningful and evocative playlist that Timmmii made just for this anniversary called "20"-and proceeded to listen to it 6 times in a row while at this cottage. Just wait till you hear the version of Frank singing "Send in the Clowns" and make sure you have a few hankies nearby. 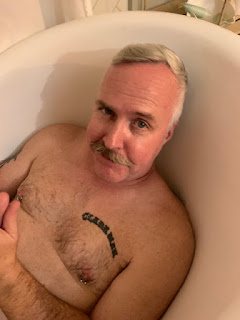 When I woke to stare across Tomales Bay and the fog bank that so gently descends, I had a few epiphanies about what our 22 year relationship was, what it was not, and faced some aspects of it that I could only deny before. It was extremely uplifting, and I am thankful for the protected time to really sink into the past and stitch together a few threads that I haven't been able to so far.

Doug left many recordings for me and Clara to listen to after he died- and in one of them he asked me not to think of the hard, tragic times of the last year of his life, but rather the early, extremely heady years when we were falling in love, and building a new relationship. So I did that. For many reasons, I had not able to access those feelings for a very long time. But with the right rituals in that cottage where we shared our last romantic time just 7 months prior, and surrounded by all that wedding ephemera, they all came flooding back. Super big warm waves of love rolled over me. I am so thankful for his messages- and the requests he made of me which I am religiously working to uphold. The result is that I feel that love all over again, and therefore miss him in a way thats harder and deeper than ever before. The hot tears that just start leaking over my cheeks haven't really slowed down since then. And that is ok- I have the time to GO THERE during all this SIP madness. Moving through it.


Right now, Clara is in LA staying with The Loper Family who invited her, along with her boyfriend of nearly a year, to stay in their in-law for a well deserved getaway. She passed all her 10th grade classes! And does not need to do any summer school this time! The way she continues to evolve and mature through such trauma astounds me and all those around her. We are gonna try and have a mellow summer and have a few safe excursions and campouts whenever we can, including taking a flight (!!!) to North Carolina to see my ailing folks.

With COVID followed by riots and what I hope will be some major cultural shifts that arise thanks to the many Black Lives Matter campaigns happening now, the emotions all are over the place. As many have pointed out, it is a blessing that Doug went when he did, and that we have time to mourn and rebuild our lives a bit when the world is slower and in the midst of great change.